Remember when I told you about this “poopy clutch”?  In case you’re wondering what it is, it is a little clutch to hold a couple diapers and wipes so they all stay together in your bag or purse.  I made one a while back but ended up giving it away as a baby gift with a set of burp cloths and a soctopus I made.  So, it was time for me to make another one just for me.

Once I bought the supplies, putting it together was super easy.  I printed out the free pattern, traced it on the back of my vinyl with pencil, cut little holes where I wanted the button stud to go using my seam ripper, screwed the button stud through the 3 layers, and then cut a little slit in the top where I wanted it to slip over the button.  That’s about it if you want to leave it as is. I decided to spruce mine up a bit since the vinyl I got from the remnant bin is a kind of boring tan color.

The first one I made I painted a turquoise feather on the front flap and also on the back.  The second one I sewed on a leather feather to the back.  I also sewed a top stitch around all the edges to give it more interest.

Here’s the original clutch.  You can click on the picture to get to the pattern. 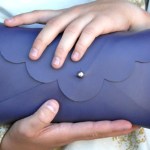 I had hoped to find a button stud locally but none of the stores had any.  I looked online but all the places I saw at first had each stud valued at around a dollar or more each with shipping being a few dollars.  That seemed a bit crazy to me.  Thankfully I did find a guy on etsy where I could buy a 10 pack of the studs and also the leather I used for the feather for much cheaper.  Plus, since I bought both together it made the shipping cheaper.  The studs were $5 with $4 shipping so that made each stud less than a dollar…much better than around 4 or 5 dollars for just one.  So, even though I didn’t need 10 at the time they are easy to use and I’m sure I’ll be making more things with them.

Oh, and if you wondering, sewing through the vinyl and the leather were both wonderfully easy.  My sewing machine originally came with a few different types of needles and so I used the most heavy duty one of the bunch and it sewed through it all like it was butter.

One last modification I made was that I glued the bottom flap to the two side flaps using E6000 glue (that stuff glues anything!) because it does shift around a lot. I think in doing that I also made it so that it’ll hold a little less but that is ok because I don’t want something too bulky.  Besides, little baby diapers are super tiny and cute anyway.